Once the principal river port of the Upper Mississippi Valley, Galena reached its economic peak during the 1850’s.  With the coming of the Illinois Central Railroad, a group of local investors formed the “Galena Hotel Company” and built a grand hotel to reflect the growing prosperity of this “Metropolis of the Northwest”.  Named for the discoverer of the Mississippi River, the DeSoto House opened on April 9, 1855 and was billed as the “Largest Hotel in the West.”

At the time of its conception, the DeSoto House was built to service the many people arriving in Galena which was flourishing as a major mining and trade center.  The original hotel building consisted of five stories and a lower level.  The DeSoto boasted 225 guest rooms, a gentleman’s reading room, ladies’ parlors, a 300 seat dining hall, a kitchen with equipments for feeding hundreds, and it own gas works for lighting halls, dining rooms, and public areas.  In addition, retail stores, offices, a saloon, and a bowling alley also found their home in the DeSoto House.

The first proprietor of the DeSoto House, John C. Parks, furnished the hotel at a cost of $15,000 in exchange for a two year rent-free contract.  Furnishings included velvet carpets, rosewood furniture, marble -topped tables, satin damask curtains, and a “double round seven octave carved rosewood Piano Forte”.  A reporter from the Buffalo Commercial Advertiser wrote of the DeSoto House that it was “the perfection of neatness, convenience, and accommodations”.

Thus the DeSoto House began its years as the center of Galena’s social and political activities.  Perhaps its most notable visitor was President  Abraham Lincoln, who spoke from its Main Street balcony on July 23, 1856, in support of John Fremont’s bid for presidency.  Just two years later, on July 25, 1858 Senator Stephen A. Douglas spoke from the same balcony.  On September 13, 1860, a crowd of over 15,000 rallied in front of the DeSoto in response to a “Grand Republican Mass Meeting” in support of Lincoln’s presidential bid.

Ulysses S. Grant’s return to his hometown of Galena following the Civil War, brought 25,000 citizens to the streets to welcome him home.  Bands, parades, and cannon salutes preceded a reception ball for 2,000 persons which was held at the DeSoto House.  Grant later used rooms 209 and 211 of the hotel as his presidential campaign headquarters.

As the economic focus of Galena shifted, and railroads instead of steamboats took the lead in transportation, the DeSoto House also met with problems.  Only four years after its grand opening, the grand hotel suffered a fire on June 2, 1859, which destroyed a dozen rooms on each floor with water and smoke damage to the entire hotel.

During the next years of Galena’s economic decline, the DeSoto House had several shining moments.  Then the occasion would arise to welcome home returning soldiers or dignitaries, or welcome celebrities to the area, the DeSoto House proved itself to be the ideal place for a great banquet or ball, providing ample space and just the right atmosphere for such events.

Misfortune was to haunt the DeSoto House once again on December 7, 1869, when a steam boiler located in the dye works in the hotel’s basement exploded.  Subsequently, the hotel was put up for rent in May 1870.  Furnishings were auctioned in October of the same year and the doors of the hotel closed in December 1870. 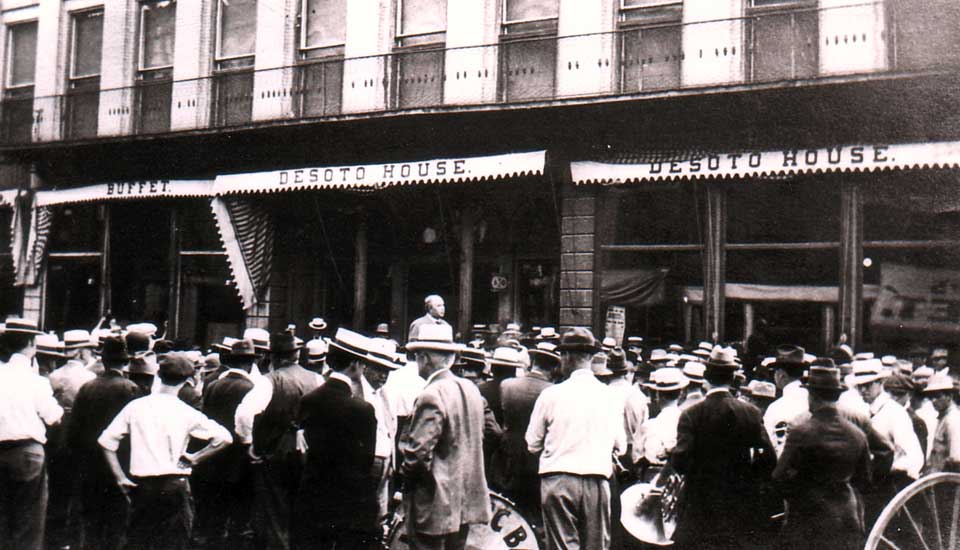 Better years came to the DeSoto House.  W.H. Blewett purchased the hotel in 1871 and once again Galena had entered an economic period of prosperity due to small local industries.  Blewett redecorated the hotel to cater to the needs of the community.  The DeSoto House was host during this period, to traveling performers such as General and Mrs. Tom Thumb, Duprey and Green’s Minstrels, and American aeronaut, Professor S.M. Brooks.

In 1880, the upper two floors of the hotel were removed.  1883 saw the tavern moved to the Green Street side of the building and a small bowling alley added to it.

Later owners of the hotel redecorated and installed hot and cold running water and bathrooms on all floors.  Gradually, with the economic tide of the town, the DeSoto House ebbed into a role of a combination hotel-boarding house.  Renovation of the hotel was attempted once again in 1971 and 1977.

Seven years elapsed until 81 year old mayor, Frank Einsweiller, was able to assemble all the necessary people and funding to begin the $7.8 million restoration, on the condemned building which transpired between April 15, 1985 and April 19, 1986.

The DeSoto House encompasses a four-story atrium for Courtyard dining serving breakfast, lunch and private banquets as well as the Generals’ Restaurant named in honor of Galena’s nine Civil War Generals which offers a lounge and dining rooms amidst the atmosphere of the original brick walls and beamed ceilings.  Green Street Tavern, the third dining area, in its 1883 location is the perfect place to sit and watch Main Street.

And so, the DeSoto House has come full circle.  From its grand opening in Galena’s glory days, through economic change and misfortune to once again offering deluxe accommodations and superior service in a most historic setting.

If one listens closely enough, one can hear the DeSoto’s rich heritage whispering of historic conversations and music from grand balls of days gone by.

We invite you to enjoy your time with us and it is our honor to add your name to our list of notable guests. 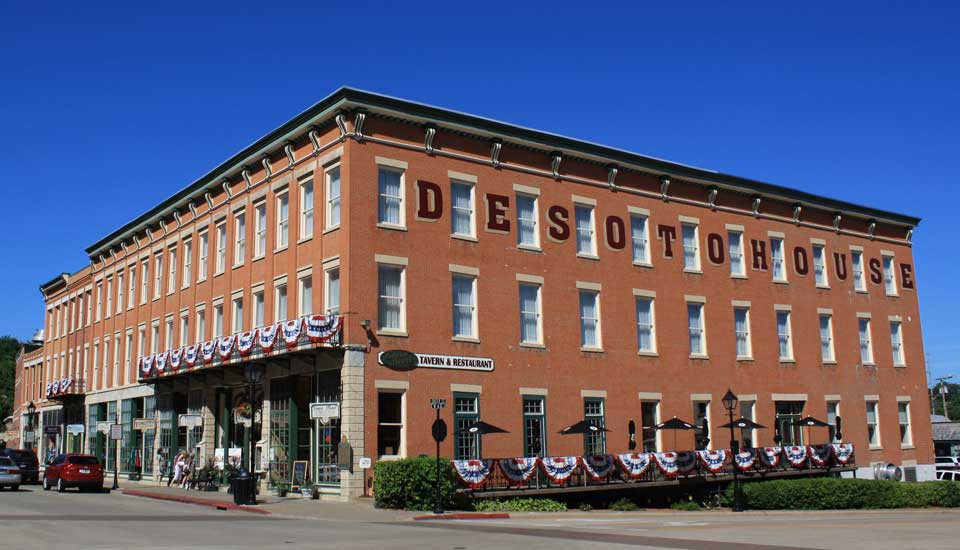 Best place to stay in Galena! In our opinion there isn't a better or more convenient place to stay in historic Galena. On Main Street in the heart of the tourist-happy shopping district. Food always excellent and plentiful in any of the three restaurants. Very comforatable rooms and an excellent staff. Yes they do it right at the DeSoto House.